Gabriella Solti (gab.solti@gmail.com) is a Hungarian born Canadian visual artist, living in London, Ontario, whose multidisciplinary project based practice centres around a number of key interests. She has been interested in signs, symbols and notations since her studies in advanced mathematics. This interest informs her rule based drawings or artworks that employ graphic notation systems. See gabriellasolti.wordpress.com

A significant part of my art practice is collaborative art making in an accessible, open, inclusive environment that engage a diverse public, —children, teens, and adults—, in a delightful and unexpected way to mobilize their curiosity and engage them with art through experimentation, surprise and discovery.  My collaborative projects with the public combine art, science and technology seamlessly and playfully, often to uncover spectacular properties of mundane materials, the local environment and natural phenomena. 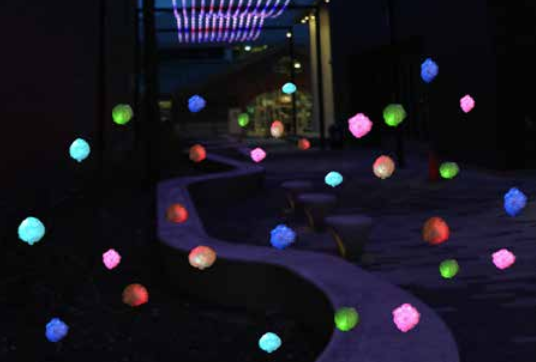 My most recent project in the Children’s Museum and the Dundas Street Festival in London aimed to simulate two spectacular summer phenomena, shooting stars and fireflies that can be connected to math education using it as a tool for creative data visualization.

Using simple creative construction techniques, clear food wrap and tiny multicolour flashing LED lights we can make small, lightweight and soft light balls that will rhythmically change their colour through a multitude of vibrant colours. This light ball can be used in choreographing the patterns of both fireflies and meteor showers.

The following sections describe how to make the light ball (also see images), and offer two scenarios using them in the classroom. 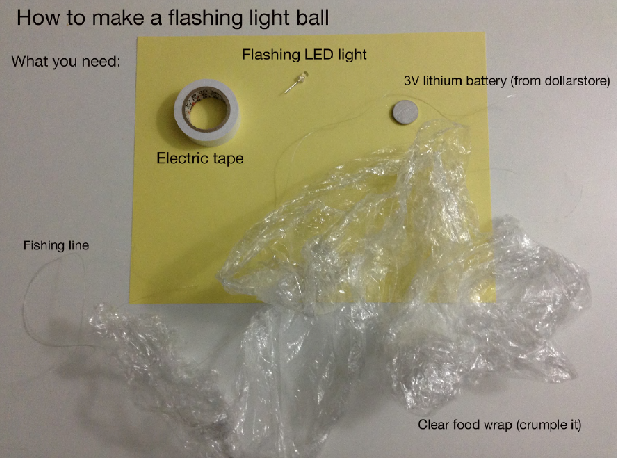 What you need and where to buy them: 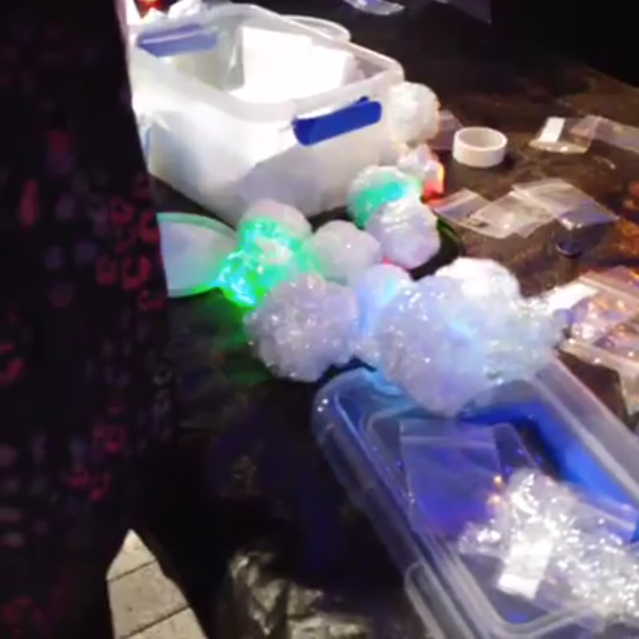 2. Use a piece of white electric tape to secure the LED to the battery. Make sure it is strongly attached and the LED legs are kept in contact with the battery. 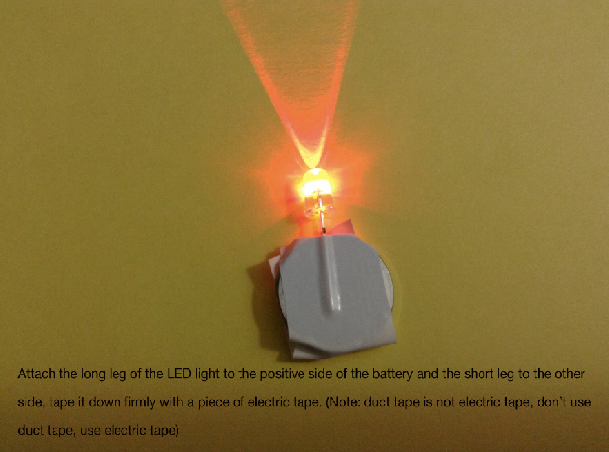 3. Take a piece (arm length of an adult) of clear food wrap. Very gently crumple it. You are not making a ball now; at this stage, you simply make small creases in the clear food wrap.

4. Place the battery with LED in the centre of the crumpled food wrap. Using hand movements like gathering the snow around it, lift it up and make a snow ball. 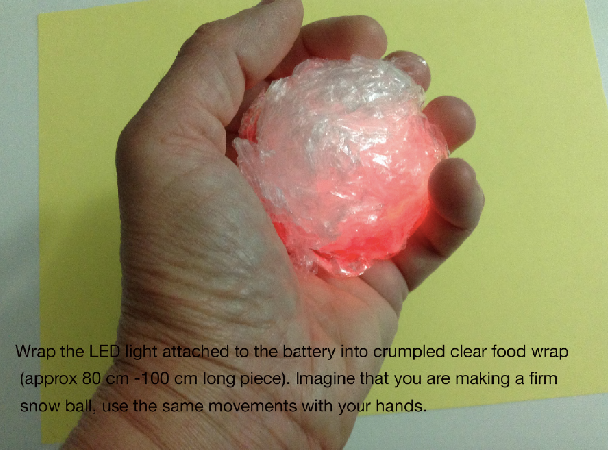 5. You can use a piece of fishing line or white sewing thread to wrap around the ball a couple of times and knot to make sure it will not fall apart accidentally later. 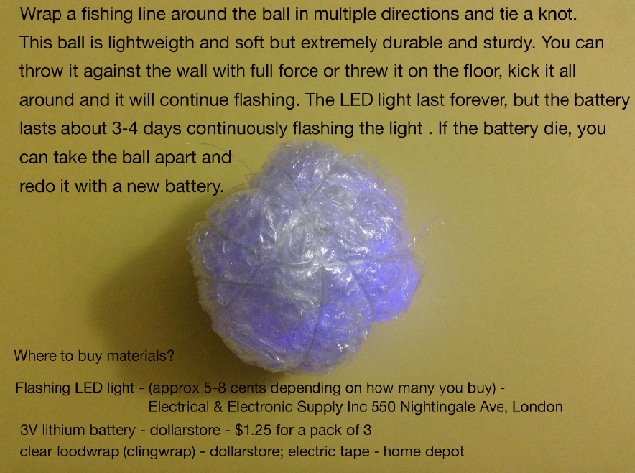 The most important thing in making the light ball is to resist the tendency to use the food wrap as we used to, wrapping things into it. We do not wrap the LED with battery into the food wrap. If we did, we would loose the beautiful prismatic effect the gentle creases produce. Following the instructions above will make sure that you produce myriads of prisms inside the ball and that’s why the ball appears way more colourful and vibrant compared to the LED itself.

The flashing LED light has a preprogrammed pattern and flickers while changing colours. The colours of the LED are all the colours various species of glowing fireflies produce such as green, amber, yellow, green-yellow, orange, red and also blue, the colour of the North Carolina blue ghost firefly. An important thing to know about fireflies that they lit up in a relationship with their environment. Their blood tastes so bitter that they have only one true predator, the spider. So when a firefly lights up, it tells other potential predators like birds and insects to stay away, it is not worth eating. It also tells fellow fireflies that it is ready to mate.

Thus the light ball can represent a firefly only if it is constantly kept in the air, if the children throw the balls to each other taking their choreographic clues from real fireflies. The North Carolina blue ghost firefly has a special characteristic that can put to the test the children’s problem-solving skills and take measurements.Blue ghost fireflies synchronize their movements and float together 30 cm above the forest floor forming a flickering blue carpet.

Ask the children to imagine themselves as blue ghost fireflies. How can they make sure they pass the light balls to each other following a straight line exactly 30 cm above the classroom floor? Is there a piece of furniture in the classroom whose height is exactly 30 cm above the floor so they could use it to roll the ball on its surface? They need to measure. What about putting together several boxes (or making boxes) with one side 30 cm so they can create a surface for rolling the balls to each other? What about using mailing tubes cut in half at length and rolling the balls in this half-tunnel. They can hold it at the two ends 30 cm above ground, but how they can make sure they can hold it steady? Can they build legs or other support system for the tubes that keeps them 30 cm above the floor?

The light ball can be used well to visualize through play how meteor systems work. One of the key characteristics of meteors is the Zenithal Hourly Rate. In astronomy, the Zenithal Hourly Rate (ZHR) of a meteor shower is the number of meteors a single observer would see in an hour of peak activity. The radiant (also called apparent radiant) is the point from where the meteors appear to be originating. Meteor shower particles are all travelling at the same speed and in a parallel path, so they will all appear to an observer below to radiate away from a single point in the sky. This phenomenon is caused by the effect of perspective,  similar to parallel railroad tracks converging at a single vanishing point on the horizon when viewed from the middle of the tracks.

So let’s make the children create a meteor shower in the classroom that scientifically accurate regarding the Zenithal Hourly Rate. The Quadrantids, active from January 1st to January 10th has a ZHR 120. For simplicity, we can assume that the meteors follow each other at equal intervals. They can calculate what that interval would be. In this case, it would be one light ball thrown in every 30 seconds which would make it a very boring class. And here’s where creative data visualization can come into play. In creative data visualization we accelerate or slow down the phenomena to make it more pronounced. In our case, let’s assume we substitute one hour with 10 minutes. So we have to throw 120 balls in 10 minutes in equal intervals. (We don’t have to make 120 balls as we can pick them up from the floor and use them again.) Calculating again the interval it means we throw a ball in every 5 seconds. We can play with substitute one hour with 5 minutes, 8 minutes, 2 minutes and make children calculate the intervals again and throw the balls following that interval.