The Father of Educational Computing 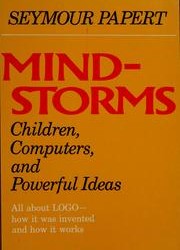 “One might say the computer is being used to program the child. In my vision, the child programs the computer, and in doing so, both acquires a sense of mastery over a piece of the most modern and powerful technology and establishes an intense contact with some of the deepest ideas from science, from mathematics, and from the art of intellectual model building.”    – Dr. Seymour Papert, Mindstorms (1980)

Often known as the “father of educational computing”, Dr. Seymour Papert’s interest in education was sparked by his early work with Dr. Jean Piaget. As a mathematician, Papert wanted to take the ideas of Piaget and apply them to mathematics education.  Although Papert agreed with Piaget’s ideas of “constructivism” however, he disagreed with Piaget’s “stages of development”.  In his book Mindstorms, Papert suggested that Piaget’s stages do not exist in children’s minds but in the poverty of school culture.

Papert designed Logo, an educational programming language, as a richer learning culture. It was developed to have a “low floor”,-allowing children to engage with minimal prerequisite knowledge, and a “high ceiling”,-offering opportunities to explore more complex ideas (Papert, 1980).  In Mindstorms, Papert stated, “The idea of “talking mathematics” to a computer can be generalized to a view of learning mathematics in “Mathland”; that is to say, in a context which is to learning mathematics what living in France is to learning French”.

The famous Turtle programmed by Logo. Logo has helped people to think differently about how to teach geometry and social science through programming.
Photo source:  http://roamerrobot.tumblr.com/post/23079345849/the-history-of-turtle-robots

A modern day version of the Logo Turtle as seen in Python.
Photo source:  http://pythonturtle.org/

The video below shows children programming with Logo. Notice how students were able to apply their programming knowledge to solving math problems.

According to Papert, “The role of the teacher is to create the conditions for invention rather than provide ready-made knowledge.” (1993). By giving our students the opportunity to learn math through coding, and a chance to design their own algorithms to solve problems, we are providing them with “tools to think with over a lifetime.” (Papert, 1980)

What more can we say? Witness it yourself. Try coding in math class, along with your students.

Take a look at some of Papert’s other inspiring works here: